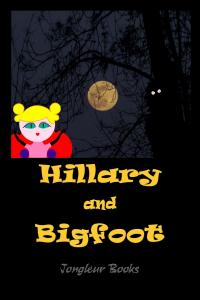 After making Ladybug City her new home, Hillary gets a visit from none other than Bigfoot.

Hillary the Little Ladybug’s life has been full of crazy adventures, and in the latest book, Hillary comes face to face with the infamous Bigfoot.

LOS ANGELES, CALIFORNIA, UNITED STATES, October 20, 2022 /EINPresswire.com/ — Moving is never easy, but imagine running into a mythical creature in your new backyard! In the new children’s adventure, Hillary and Bigfoot, Hillary the Little Ladybug moves with her family to a new city. After making Ladybug City her new home, Hillary gets a visit from none other than Bigfoot.

Co-authored by William Dandurand, Elisabeth Revel and Mary Cohen, The Adventures of Hillary the Little Ladybug series explores climate change and other topics through stories aimed at young readers.

In the latest story, Hillary sees Bigfoot on her very first night in her new home. She soon discovers that the Bigfoot tribe is struggling with a lack of food. Their solution to this problem is rummaging through the trash and even breaking into homes to steal food.

Things seem to get worse before they get better, with Hillary’s new friend Tiny Tim disappearing. Now Hillary must figure out what to do before it’s too late.

The series features original illustrations, photography and playfully educational storylines to tell adventurous children’s tales from the perspective of a precocious ladybug.

A team of authors and illustrators have collaborated on this 17-book series, including Mary Cohen, Elisabeth Revel, Gary Revel, Naomi Kiber and William Dandurand, whose grandfather, Ray Lowe, worked for Disney. All proceeds from sales of the “Ladybug” books benefit Mother Nature Festival Live Inc., which endeavors to stop harmful climate change.

In previous episodes of the Hillary the Ladybug saga, our heroine has solved the mystery of the secret cave, found herself in a post-nuclear world, joined the crew on a submarine, faced giant sharks, encountered a haunted castle, met the King of England, learned a valuable life lesson from a praying mantis, dealt with a family vacation gone wrong, and in this new book, learns about food scarcity from the infamous Bigfoot tribe.

The original illustration of Hillary the Little Ladybug was created by American-born Gary Revel Jr., a 2006 Finnish Star Winner who lived in Finland for 16 years. Revel Jr. has received acclaim for his singing, dancing and acting in Finland and Hollywood, California.

“The Adventures of Hillary the Little Ladybug is in development at Jongleur Pictures LLC for the making of an animated series to be produced by Jeff Olm,” says Gary Revel. “Jeff has been on the film-making team of many top-grossing films over the last 20 years. These include Titanic, The Revenant, Shrek Forever After, Kung Fu Panda, Madagascar 3: Europe’s Most Wanted, Avengers: Age of Ultron, and many more.”

Jongleur Books publishes other William Dandurand-authored books, including ABC Owl: Who Are You, Lochy the Loch Ness Monster, Harry the Fairy, Global Warming A to Z, Halloween A to Z, California Girls A – Z, Treasure Stories Told by My Grandfather and Hillary and the Haunted Castle. The publishing company’s backlist includes over 70 books, novels and chapter books from over 20 authors and illustrators.

For more information about how the Hillary the Little Ladybug series is helping to stop global warming, visit https://mothernaturefestival.live.

Also visit https://garyrevel.com/book/, or follow the publisher on Facebook at https://www.facebook.com/jongleurbooks. The Adventures of Hillary the Little Ladybug series is available from Amazon.com.