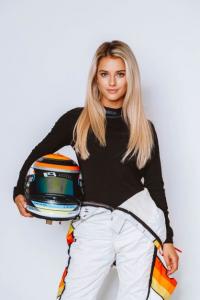 Lindsay and EA have great visibility in the sport, and we are excited to have Lindsay join us in our booth at SEMA, which should create quite a buzz!”

LOS ANGELES, CA, USA, October 27, 2022 /EINPresswire.com/ — Biocide Systems™ today announced that it is a co-primary sponsor of open-wheel racing team Exclusive Autosport (EA), and a title sponsor for driver Lindsay Brewer in a soon-to-be-announced 2023 pro-racing series, promoting its product Auto Shocker™, the safest and most effective product currently on the market for removing offensive smells from vehicles. Brewer will also be present to sign autographs as part of a meet and greet/photo opportunity at the SEMA 2022 show, taking place November 2nd, and 3rd from 12- 2 pm, in the new West Hall at the restyling section of the Biocide Systems/Auto Shocker Booth 54165.

Brewer, 25, touted as “The future of IndyCar,” started racing at the age of eleven, when she took her first ever laps in a kart. In 2022 Brewer made her debut in the Indy Pro 2000 series where she finished with three top-ten finishes in her Rookie Season. She currently drives for Exclusive Autosport, (EA), a professional racing team dedicated to the success of its drivers in open-wheel formula car competition in North America. Their drivers have secured numerous championships, race wins, podium finishes, and pole positions, as well as Rookie of the Year awards. In addition to racing, Brewer is a model with representation from the MN2S agency and is known as an influencer with a large social media presence and over one million Instagram followers. In 2023 Brewer will be driving with Exclusive Autosport for a full season as she works her way to the NTT Indy Car Series and the Indy 500.

“As one of the few women driving in a very male-dominated sport, Lindsay is a true role model and inspiration to others. EA is also a great team for us to sponsor as their mission is to develop drivers and prepare them for the upper echelons of professional motorsports, and they are doing a superb job. Lindsay and EA have great visibility in the sport, and we are excited to have Lindsay join us in our booth at SEMA, which should create quite a buzz!” said Biocide Systems™ CEO/co-founder, Juan Carlos. “We just finished a three-year sponsorship of NHRA champion racer Justin Ashley, who became Rookie of the Year and is now ranked number 3. Hopefully, our sponsorship can also serve as a good luck charm for Lindsay.”

Auto Shocker™, which will be demonstrated at Biocide Systems’ booth during the SEMA show, totally eliminates all kinds of odors due to a new, proprietary technology perfected by Biocide Systems™ and CLOO Labs, Inc. It completely removes – not just masks – any trace of stenches that can linger in the confined spaces of vehicles. This includes cigarette smoke, spoiled foods, rotten milk, mildew, pets, urine, and vomit, to name just a few.

Biocide Systems’ ClO2DMG technology™ delivery system enables the odor-killing properties of chlorine dioxide (ClO2 – not to be confused with chlorine) to be safely and affordably delivered in a gas solution (Auto Shocker™) or liquid (Liquid Shocker™). The Discovery of ClO2 as an odor-removing agent is not new, but this delivery process is newly developed to be more effective, safe, and affordable. The Auto Shocker™ delivery system offers precise application and a ClO2 concentration specifically formulated for automotive applications, developed for this market alone. The technology also eliminates the possibility of chemical spills as well as the harsh chlorine smell that accompanies other ClO2 delivery techniques.

Biocide Systems™ co-founders Juan Carlos Baselli and Spencer Blua will be available to discuss Auto Shocker™ and CIO2 Liquid Shocker™, and the unique technologies behind them, during the 2022 SEMA Show, November 1-4, at the Las Vegas Convention Center.