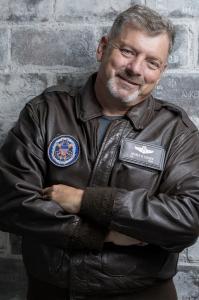 The Ukraine War is vastly different than in Iraq and Afghanistan, as the air and EMS domains remain contested.”

Electronic Magnetic Operations, known as EMSO or EMS, represent “the ability to use the electromagnetic spectrum—signals such as radio, infrared or radar—to sense, protect, and communicate,” according to Lockheed Martin, a major defense contractor. “At the same time, it can be used to deny adversaries the ability to either disrupt or use these signals.”

Currently in Ukraine, both sides employ EW. “Electronic warfare technology targets communications, navigation, and guidance systems to locate, blind, and deceive the enemy and direct lethal blows. It is used against artillery, fighter jets, cruise missiles, drones, and more. Militaries also use it to protect their forces,” the AP reports.

A celebrated author who served at Air Force Headquarters in the Pentagon, Fischer addresses the topic “What Will it Take for Ukraine to Achieve EMS Superiority” during the roughly half-hour podcast that originally aired Sept. 14. The interview is sponsored by the world’s leading EW organization, The Association of Old Crows, a name dating to WWII when Allied operators charged with jamming enemy communications and radar were called “ravens.” The moniker was soon jargonized to “crows” and its practitioners, “old crows.”

“The Ukraine War is vastly different than in Iraq and Afghanistan, as the air and EMS domains remain contested,” says Fischer, who is covering the war from his residence in Austria. “Ukraine’s inability to control these battlespaces has detrimental effects into other battlespaces. For example, logistical resupply and wounded evacuation are quite risky via the air, given Russia’s fighter jets and radar-guided surface-to-air missile systems. These two missions [resupply & evac] in Ukraine are predominately executed via land routes, slowing resupply and, sadly, increasing casualty rates.”

With thirty years’ military experience in Electronic Warfare, including seven combat tours in Afghanistan, Iraq, and the Balkans, Fischer is a highly sought-after expert and analyst. His writing has been published in many outlets, including the AOC flagship, The Journal of Electronic Dominance—International Electronic Warfare. Fischer has been invited to AOC’s annual international symposium Oct. 23-27 in Washington, D.C. and is looking forward to the Oct. 11 publication of his latest military action thriller Balkan Reprisal.

BIO: Colonel Fischer is a Master Navigator with over 1,800 flying hours, including 400 in combat or combat support. He flew both the Air Force’s EC-130H Compass Call and the EA-6B Prowler while on a joint exchange with the US Navy, seeing considerable combat time in both air frames. Fischer has been earned numerous awards and decorations, including the Air Medal with two oak leaf clusters and a “V” for Combat Valor. Near the end of his career, he was assigned as a Diplomatic Defense Official to US Embassies in Austria and Kosovo. Fischer holds degrees from Indiana University; Air Command and Staff College; and the Eisenhower School, National Defense University. His writing style is greatly influenced by Tom Clancy, Michael Crichton, Dan Brown, and John Grisham, who are some of his favorite authors. Fischer resides in Austria with his wife, Barbara, and son, Tobias.