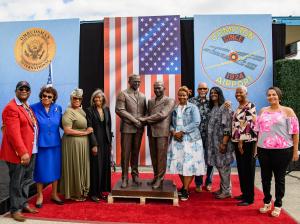 Officials and dignitaries join L.J. Guillory, of Ombudsman International Inc. at the unveiling of a new statue of the historic 1961 meeting between LA County Supervisor Kenneth Hahn and Martin Luther King Jr. 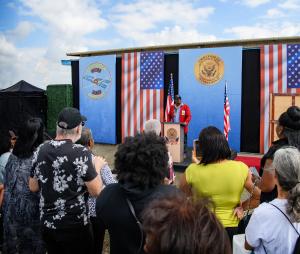 Bishop L.J. Guillory, Ombudsman International Inc., welcomes officials, partners, neighbors and other guests to the unveiling of the new statue. 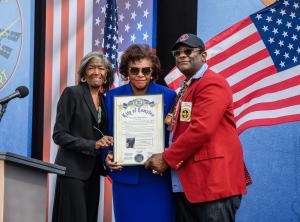 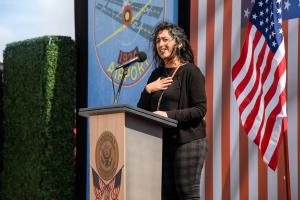 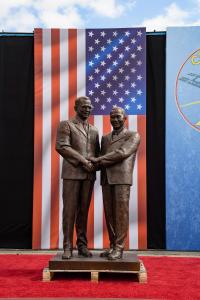 LOS ANGELES, CALIFORNIA, UNITED STATES, October 28, 2022 /EINPresswire.com/ — On October 22, officials, dignitaries and religious leaders united at the Compton Airport to commemorate a history-making moment in the civil rights movement: Los Angeles County Supervisor Kenneth Hahn, the only elected official willing to meet Martin Luther King, Jr. on his 1961 visit to Los Angeles, welcoming Rev. King at the Compton Airport. The two shook hands in what has become a famous photograph, now memorialized in bronze thanks to the work of Bishop L. J. Guillory, Executive Director of Ombudsman International.

With recent exposés of racism among local politicians rocking Los Angeles, all have awakened to the fact that civil and human rights are still vital issues in the City of Angels.

“I am honored to be with you today to witness this very special occasion, celebrating a heroic moment in our history,” said Mayor Sharif, “a moment which still resonates deeply within the African American community and will continue to remind us of the importance of being brave and doing what you know is right… I am truly excited and happy this tribute to both of these dynamic leaders, Dr. King and the Honorable Kenneth Hahn, is being unveiled right here in the great City of Compton. This is a testament to the history that continues to be made in our city.”

“With the recent unnecessary, ignorant comments made by City of Los Angeles councilmembers, this is such a befitting thing to do today—to unveil the statue of a man who understood the importance of unity, who understood the importance of reaching across the aisle to communicate with people,” said Ms. Aide Castro, representing California Assemblymember Mike Gipson at the unveiling of the statue.

All then gathered to unveil the majestic bronze statue of Kenneth Hahn and Rev. King, a symbol of humanity and integrity, as well as the power of one individual taking a stand to conquer bigotry and pave the way for a more inclusive world for all.

The unveiling had a further significance: it marked the inauguration of Ombudsman International’s new home base to combat hate, the National Anti-Racism and Conflict Resolution Agency at 1021 West Alondra Blvd. in Compton.

“This day is about coming together to overcome bigotry. It is about celebrating anti-racism. It is about doing what is right—whether popular or not,” said Bishop Guillory. “Mr. Hahn set an example we can follow every day of our lives. Now is the time to do what is right. Because Kenneth Hahn thought selfless about his constituents, it went across religious barriers. It went across race barriers. All of these people and those demographics still cherish him as one of their leaders. And that’s why we have the statue today.”

Dr. King’s 1961 visit to Los Angeles came at a critical moment for the civil rights movement. Two years earlier, in the summer of 1960, Dr. King was among the civil rights leaders who organized an NAACP rally at the Shrine Auditorium and led 6,000 protesters on a march to demand the Democratic Party endorse a civil rights platform. That same year, 6-year-old Ruby Bridges, escorted by federal marshals, became the first student to integrate William Frantz Elementary School in New Orleans. Dr. King’s visit was also within months of racial violence that shocked America during the Freedom Rides of the summer of 1961—with Black and white activists protesting segregation and facing the consequences.

But despite the growing momentum of the civil rights movement, which reverberated throughout the world, only one local official in Los Angeles had the courage to take a public stand in support of Dr. King.

That bravery has now been captured in bronze, forevermore.

Ombudsman International and the Church of Scientology partner to protect, defend and promote civil and human rights.