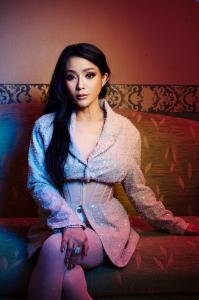 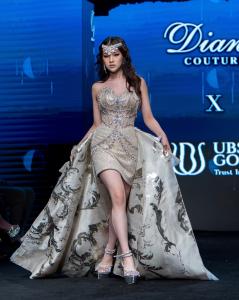 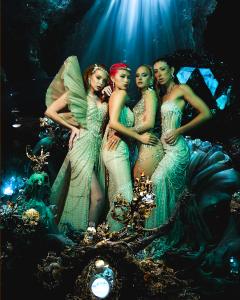 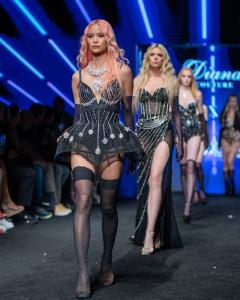 “The Siren Song” Presented by DIANA Couture and GBS Gold 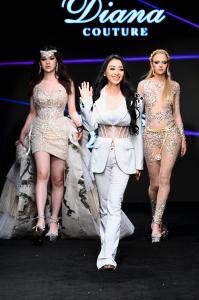 LOS ANGELAS, CALIFORNIA, UNITED STATES, November 8, 2022 /EINPresswire.com/ — Following their successful collection last year, Diana Couture x UBS Gold returns with their
second international collaboration. This year, they decided to explore the alluring mysteries of
the deep ocean, The Siren’s Song. Inspired by the infamous Greek mythology of the stunning yet
feral; half-maiden half-fish creatures, this collection explores the powerful beauty that a siren
holds. Often, we associate beauty society’s standards of how a woman should be, however, with
this collection, Diana Couture and UBS Gold proceeds to break all those rules.

This message is in line with UBS Gold’s recently launched campaign #Iam24k, which aims to
remind everyone that all of us are precious, authentic, unique and worth like 24 carat pure gold.

A line up consisting of elegant corsetry gowns, Swarovski-encrusted sheer catsuits, opulent
bodysuits, and an overflowing amount of tulle; Diana’s collection stays true to her brand identity.
Through the various silhouettes, lengths, and attire; every gown is made to fit the brand identity
of a Diana Couture woman; empowered, elegant, and unique. Contrasting Diana’s elegant yet
daring aesthetics, UBS Gold decides to take it to the next level with a wide array of chains, fancy
earrings, statement necklaces, and even to chain belts. Shifting from their previously more
feminine aesthetics, UBS Gold wants their pieces to feel versatile, whether for the Oscars, a
casual night out, or in this collection, under the sea.

The concept does not end there. Often, when one thinks of sirens (or mermaids), sea creatures,
and the ocean in general, bright, or pastel colors seem to be the first element that comes to mind.
However, this season, Diana Couture and UBS Gold decides to break those boundaries and go
with a more neutral palette. Obsidian black, Arctic Silver, Daffodil Gold, as well as off whites
dominate the collection. The highlights glimmering from the Swarovski and Gold Jewelries seem
to be the main correlation to the theme, inspired by the way water refractions moves. Through
this collection, Diana Couture and UBS Gold had once again delivered a powerful yet thematic
story. This time, it focuses on an empowered woman who is filled with beauty and grace,
enticing you into an underwater world filled with wonders, alluring you with her beautiful,
enigmatic, yet dangerous song.

The collection, that took place on the 15th of October, 2022 was highly acclaimed by fashion
enthusiasts, celebrities, stylists, and many more. The show didn’t only had a lot of A-lister
guests, it also featured a lot of celebrities and influencers walking the show, such as Jessica
Belkin, Dayna Marie, Cherish Waters, Yuki Bomb, Goblin Goddess, Yoli Lara, Katie Bozner,
Virginia Sanhouse, Sayda Word, Alexandra Morillo, Sophie Gabriella, April Tiberc, Bella
Duffy, Crisely S. Garcia, April Tiberc, and many more. A couple of the dresses also made it to
the red carpet instantly (in less than 2 days) after the collection was launched. Emma Norton
wore Diana Couture to the premiere of Netflix’s”The School for Good and Evil” and “My
Policeman’, starring Harry Styles.

Both Diana Couture and UBS Gold have a lot of upcoming projects with this new collection in
Hollywood, as the pieces have been highly requested by Hollywood A-listers and stylists.

The Collaborator, UBS Gold, has established itself as a leading Gold Jewellery and Gold Bar
Manufacturer in Indonesia and around the world. UBS Gold recently carried out a brand
transformation to be closer to gold’s enthusiast. With a new spirit, endless innovation and
excellent standard in quality, UBS Gold strive to produce only the best. The astonishing designs
has been loved by many well-known artists around the world such as Mariah Carey, Carrie
Underwood and Bella Porch to name a few. UBS Gold believes in the beauty and the value of
the gold, hence their tagline “Trust in Gold”.