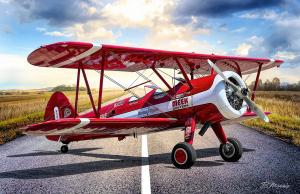 This 1944 Stearman is one of six restored WWII-era biplanes used to honor senior military veterans with Dream Flights. Founder Darryl Fisher flew this plane to give the very first Dream Flight to a World War II hero named Hugh Newton, in 2011. 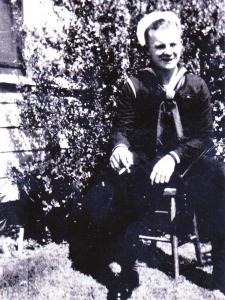 George Coburn, pictured here in 1938. George was serving on the USS Oklahoma, moored at Pearl Harbor, when on Dec. 7, 1941, at least 12 aircraft targeted the ship. The initial torpedo crashed 20 feet under the waterline that was located on the third deck,

The freedoms we enjoy today are only possible because of the sacrifices made by George and 16 million other Americans during WWII. Honoring George with a Dream Flight is our privilege.”

The public is invited to come out to watch George experience the Magic of a Dream Flight on Wednesday, Dec. 7, 2022. The flight is scheduled for Noon, Pacific, so plan to arrive at approximately 11:30 a.m. There is no charge to watch the event.

George will climb into the open-cockpit biplane with assistance from Dream Flights’ volunteer crew. Once he’s buckled in, and with his canvas helmet secure, Dream Flights founder and pilot Darryl Fisher will taxi down the runway and take off for a 20-minute flight of a lifetime.

Soaring about 1,000 feet above family and friends, George will have a bird’s-eye view of beautiful San Diego. When he lands, according to Fisher, there’s no doubt he’ll be smiling ear to ear and feeling more joy and excitement than he has in a long time.

After his Dream Flight, George will sign his name on the tail of the plane, a Dream Flights tradition that started during last year’s Operation September Freedom. During this historic 61-day tour, pilot volunteers traveled coast to coast in a fleet of six restored Stearmans, landing in 333 cities and 47 states to honor 891 World War II heroes. Every WWII hero signed their name on the plane’s tail after their flight.

“Honoring George with a Dream Flight is a privilege for me and our crew,” said Fisher. “The freedoms we enjoy today are only possible because of the sacrifices made by George and 16 million other Americans during WWII. There are so few WWII veterans with us today; anytime we can thank a WWII hero for their service, we’ll do what can to make it happen.”

Dream Flights has given nearly 6,000 free flights since 2011. The nonprofit never charges veterans or families or a flight. The volunteer-based nonprofit relies on the generosity of its primary sponsor Sport Clips, national sponsors that include American Airlines and Veterans United Home Loans, and individual donations to cover costs to operate and maintain its fleet of Stearmans and fly seniors and veterans from airports located near where they live. Tax-deductible donations can be made at www.dreamflights.org/donate.