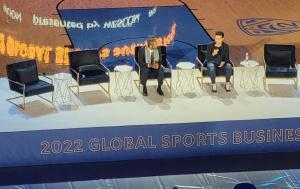 Commander Ardo on stage with Leo Faria of Riot Games 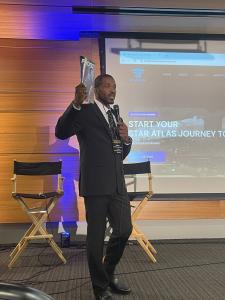 We WILL accomplish our dreams together in The Final Frontier!”

LOS ANGELES, CALIFORNIA, UNITED STATES, October 27, 2022 /EINPresswire.com/ — Led by Commander Ardo, Vyls (4th Horseman), and other officers from the organization, Final Frontier had a strong showing at the Pauley Pavilion on UCLA Anderson’s campus on October 21st. The event brought together an international cohort of decision makers and business professionals representing teams, leagues, media, talent agencies, brand partners and technology innovators, while showcasing the power of the sports, business and tech community in Los Angeles — home to Super Bowl LVI, the 2022 MLB All-Star Game and the 2028 Summer Olympics. PepsiCo, Netflix, Google, Fox Sports, Riot Games, Los Angeles Lakers, and Dapper Labs were some of the heavy hitters in attendance alongside a few dozen others.

The event kicked off with a session on understanding fandom. This was a conversation with Ben Valenta, Senior Vice President of Strategy & Analytics for Fox Sports. Commander Ardo was able to have a post-session conversation with Ben and discuss web3 and what it will mean to sports in the future. The Jockey Experience, led by Romero Maragh and his partner Al, took the stage shortly after in which Ben was in attendance to learn what TJE is doing with horse racing, NFTs and web3. TJE is an immersive, innovative collection, interactive story, and community that is dedicated to highlighting the unique sport of horse racing. By owning one of their 5,000 NFTs, holders will have exclusive access to a number of premium benefits, such as members-only airdrops, exclusive giveaways, access to TJE IRL events (including track days, private parties, charity events, and championship races), dynamic original artwork and lore (storylines), participation in charity, educational opportunities, access to TJE collaborations & partnerships, and much more!

Final Frontier Meets Riot Games
Prior to the lunch break, Commander Ardo took the main stage alongside Leo Faria (Global Head of Esports for Wild Rift & Valorant) of Riot Games. Their session was titled “For the League: Fan Experiences & Engagement in Gaming”. The audience got a sneak peek at what’s to come for Valorant Esports, how Riot Games is taking charge in the gaming scene, and the audience had some uniquely engaging questions for Leo. This was a massive opportunity for Final Frontier and piqued the interest of Commander Ardo about his organization getting involved. Riot Games has a community size in the millions, and this gives Final Frontier a chance to impact both the traditional and blockchain gaming communities from another angle.

Changing the Game with Innovation
Not only was Final Frontier given a table at the prestigious event but was also given a separate breakout session in 1 of 2 private rooms to talk about monetizing esports fandom via blockchain and analytics. During this session, Commander Ardo unveiled the world’s first physical editions of both Metapower and FRONT magazines (in which he deemed them the phygital editions). These are unique magazines, dedicated to the blockchain, NFT, and gaming space. Included content varies from artwork, new projects, market and community news, and interviews from significant figures across the crypto, gaming, and web3 space. This piqued the interest of a Netflix executive that was in attendance, and they requested a copy. The session went pretty in-depth, and the audience was intrigued on the topic of the four currencies of the world, and how Commander Ardo believes that gaming, blockchain technology, and the future of esports will afford his organization to unite people and change lives. Overall, this event just catapulted Final Frontier into the view of multiple multi-billion-dollar corporations and their executives, esports companies, major media, and a laundry list of potential partners and sponsors.