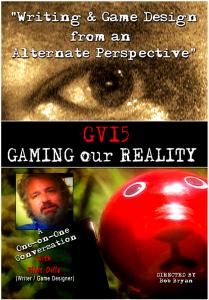 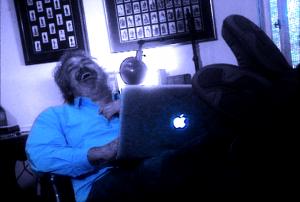 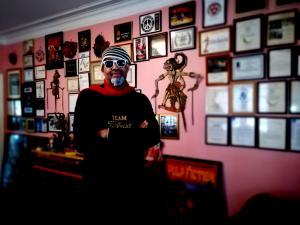 GV15 is a peek into the world of Game Design. It asks the questions you would ask of one of the best Game Designers in the business. Gamers will love GV15!”

A Fascinating and Compelling Look Behind The Veil
GV15 Trailer #1

GV15 GAMING OUR REALITY: Writing and Game Design from an Alternate Perspective directed by documentary filmmaker Bob Bryan is described as a far ranging one-on-one ‘conversation’ with Transmedia giant Flint Dille. Flint’s background in TV and Game Design is diverse and extensive.

In GV15, Writer and Gamer Designer Flint Dille openly discusses, in detail, the process and methodology of writing adaptive survival codes and compensation algorithms to ‘world-build’ and excel in a non-dyslectic world. Integrated into the in-depth conversation are insightful and practical templates that he uses to create and conceptualize characters, character analysis, story points, character interactions, as well as internal structures and codes for gaming. GAMING OUR REALITY is must-see documentary for anyone interested in Writing and Game Design.

In this amazing One-on-One interview, award-wining Filmmaker Bob Bryan takes us behind the veil with uber-talented Transmedia Giant Flint Dille. Here, Flint is spontaneously brilliant, informative, hilarious, vulnerable, and completely open about sharing intimate details about his life and his practical and disciplined approach to professional Writing and Game Design.

“GV15 is a peek into the world of Game Design. It asks the questions you would ask of one of the best Game Designers in the business. Gamers will love GV15 and neophytes will be inspired to think that they can do it too! Nice!!!!” – by Tommy Rowe, Filmmaker, DP

“(GV15) GAMING OUR REALITY was so compelling and hypnotizing! It is very true that we Dyslexic people use coded information to understand the ‘Normality’ of a problem. With your game-like sound design and visual cuts / editing style, I was transfixed to the screen and learned something about myself. Flint made it clear that we create codes to break down, decipher and analyze ‘reality’ at our own pace and from our own point-of-view.” – by Miles B., Ritualistic Gamer

“I just finished GV15. Now that was some very fascinating stuff, I had no idea what a writer/game designer like Mr. Flint Dille did to accomplish what they do… and I‘m a Gamer! The way you put the film together, you had me absolutely hooked all the way through to the end! I thought it was pretty interesting how you showed how people with Dyslexia have to learn how to adapt in a non-Dyslexic world. Brilliant! Good job!!!” – by Tony, Gamer

About the Director:
Filmmaker Bob Bryan has received over 176 Award and Festival Honors. He has Executive-Produced and Directed each of the Documentaries in the Graffiti Verite’ Docu-Series. Mr. Bryan is the recipient of the Alfred I. DuPont-Columbia University Award for Broadcast Digital News (the equivalent of the Pulitzer Prize.)