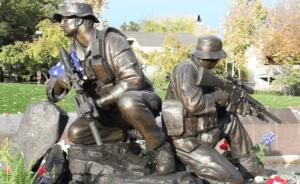 The Cupertino Veterans Memorial was the nation’s first memorial to soldiers in the Afghanistan Conflict and honors all Veterans. 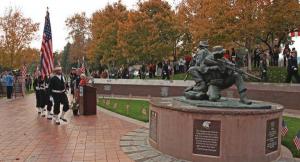 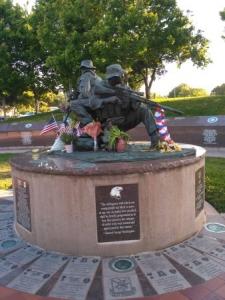 The Cupertino Veterans Memorial is the nation’s first memorial to soldiers in the Afghanistan Conflict and honors all Veterans.”

CUPERTINO, CA, UNITED STATES, November 2, 2022 /EINPresswire.com/ — The Cupertino Veterans Memorial (CVM) invites the public to its Veterans Day celebration at 11 am on November 11th in the Cupertino Memorial Park, 21251 Stevens Creek Blvd. Returning after a two-year absence, this year’s ceremony is a tribute to Gold Star families.

Dr. Lloyd Holmes, President of De Anza College, will give welcoming remarks, followed by Major General (ret.) Mike Myatt, USMC, who commanded the Marine 1st Infantry Division in Operation Desert Storm and was the president of the Marine Memorial Association in San Francisco. Student veterans from De Anza College will also assist in the celebration.

In addition, a special commendation will go to Seaman Apprentice Ginger Nelson “Doris” Jacobson, who will be honored for her service on her 100th birthday. For her service at Moffett Field in the Navy WAVES from 1943 to 1945, Doris was awarded the American Campaign Medal and the WWII Victory Medal.

Shortly after leaving her mayoral duties, Sandy was approached by a high school classmate of Petty Officer Second Class Matt Axelson, a US Navy Seal and Cupertino native who had been killed during Operation Red Wings in Afghanistan. Sandy worked tirelessly to secure the site and raise private funds for the stunning memorial we see today.

The bronze statue in the center of the Memorial depicts Petty Officer Axelson, who received the Navy Cross, the nation’s second highest award for Valor. Also featured on the memorial is his classmate from SEAL School, James Suh, who volunteered to come to the aid of the SEALS on the ground, but who was killed along with fifteen other Army soldiers and SEALS when their helicopter was shot down by Taliban insurgents.

The Cupertino Veterans Memorial Foundation welcomes everyone to join this Veterans Day celebration honoring those who have served their country–and those who gave the ultimate sacrifice. Free parking is available at the Memorial or directly across the street at De Anza College.

More information on the Cupertino Veterans Memorial is at www.cupertinoveteransmemorial.org.