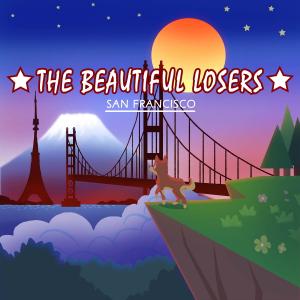 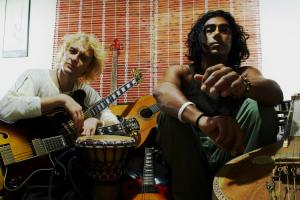 SAN FRANCISCO, CA, USA, November 2, 2022 /EINPresswire.com/ — THE BEAUTIFUL LOSERS are an alternative rock duo formed by internationally esteemed professional songwriters Indo-Canadian Raj Ramayya and San Francisco native Brett Boyd. Described as “Indian-influenced electro-acoustic alternative rock,” THE BEAUTIFUL LOSERS draw influence from a wide range of iconic rock artists, but it’s their diverse and innovative musical style and their unforgettable songs with poignant lyrics that define and set the band apart. The new THE BEAUTIFUL LOSERS album SAN FRANCISCO is available on November 25, Black Friday 2022, and keep an eye out this holiday season for the re-release of their 2005 classic Christmas album Peace, Love, and Xmas!

Brett and Raj met each other by chance in Tokyo in 1995, crossing paths when they were both young traveling artists exploring different cultures with a shared vision of creating music that has a positive impact on the world. As unknowns and outsiders to Japan they attracted a multi-ethnic group of Japanese misfits and expatriates from around the globe who didn’t fit into the usual scene, steadily gathering an assortment of unlikely friends and collaborators in the clubs and pubs of Tokyo. The new THE BEAUTIFUL LOSERS album SAN FRANCISCO is a return to form for the group, who relocated to the US following the release of their 2010 album Four Corners of a Tiny Planet. Even though they have their roots and origins in Tokyo and still feel the pull of that city, the new album is called SAN FRANCISCO because this city is now their center. For them San Francisco is an iconic image representing a sort of promised land, a place of rebirth and renewal, a beacon of hope even as things may seem broken or desperate, all of which comes through thematically on the album.

There has always been a “multi-ethnic” theme in the production of their music, and on SAN FRANCISCO, recorded and mixed at Strawberry Hill Music studios in Northern California (www.strawberryhillmusic.com), THE BEAUTIFUL LOSERS worked with musicians and engineers from Brazil, China, and Korea. The album’s closing track includes a Japanese sitar-player and was recorded in their apartment in Tokyo back in the day, adding a cool nostalgic bonus to the release and bringing it all full circle. San Francisco and Tokyo have a strong connection to each other, which THE BEAUTIFUL LOSERS showcase in their music and in the upcoming video for their new track “I Will Always Be There.” The video is being animated by Giezelle Bernal, who also did the album art in the same style that highlights the strong connection between the two sister-cities that mean so much to THE BEAUTIFUL LOSERS.

Brett and Raj began writing and recording songs again for SAN FRANCISCO around 2019 before the start of the pandemic, and the album is dedicated to two friends that passed as a result of that tragedy. The first is “Thai Tom” who the duo met on a boat with their guitars on the way to a gig on a Thai island and discovered that he and Brett had the exact same birthday and year. Thai Tom brought them to a local temple to commemorate their fortuitous meeting, and they all became so close that Thai Tom eventually officiated the wedding of Raj and his wife. The album is also dedicated to Raj’s brother-in-law, who sadly passed during the pandemic, and also coincidentally shared the exact same birthday and year with Raj.

As THE BEAUTIFUL LOSERS, Raj and Brett have developed a devout fan base through relentless touring in support of major acts such as Coldplay, Indigo Girls, and Matt Nathanson, as well as song placements in MTV reality programs including Real Life Stories, Two-A-Days, and Parental Control. THE BEAUTIFUL LOSERS have had sponsorship from Heineken and Starbucks and have developed their American fan base from live appearances on leading local radio stations KFOG and Alice@97.3, West Coast Live, Amnesty International’s Rock for Human Rights, NPR’s “All Songs Considered,” NARAS “Grammy Showcases,” and had their music featured in The Gap’s 40th anniversary marketing campaign.

Raj and Brett have spent most of the last decade prioritizing their families, raising their children while pursuing various other successful musical endeavors, but THE BEAUTIFUL LOSERS retain a loyal international fan base, due in large part to Raj and Brett’s multilingual ability to connect cross-culturally with fans throughout the world. Brett Boyd says of their formative years, “I will always credit Raj’s natural talent to be welcoming and inclusive to everyone and to attract so many different kinds of people. We performed everywhere we could, and we were sometimes surrounded by outcasts in the underbelly of Tokyo, but everyone was beautiful, and Raj and I found ways to befriend artistic collaborators and fans who are dear people in our lives to this day.”

The new THE BEAUTIFUL LOSERS album SAN FRANCISCO is available on November 25, Black Friday 2022, and keep an eye out this holiday season for the re-release of their 2005 classic Christmas album Peace, Love, and Xmas!

To order or stream THE BEAUTIFUL LOSERS music on Bandcamp please visit: https://tbl2022.bandcamp.com

For more information about THE BEAUTIFUL LOSERS please visit: www.thebeautifullosers.net