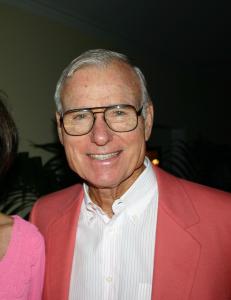 Chairman of J.F. Shea Co., Inc. Was a Leader in Heavy Construction, Homebuilding, and Commercial Real Estate & a Prominent Philanthropist

Born on September 29, 1926 in Oakland, CA, Mr. Shea grew up in the Hancock Park neighborhood of Los Angeles and graduated from L.A. High School. He attended USC’s Viterbi School of Engineering where he was a standout tennis player, winning an NCAA championship with his brother and doubles partner, Gilbert Shea.

After college Mr. Shea joined his family’s civil construction business and worked on dam and tunnel projects throughout California and the Pacific Northwest. In 1958, the company, which was renowned for its work on the Golden Gate Bridge and the Hoover Dam, was dissolved and reincorporated by Mr. Shea with his cousins, Edmund and Peter Shea. They then built the reorganized J.F. Shea Co. into one of the largest privately held companies in the United States.

In his more than six-decade career as Chief Executive Officer and later as Chairman, the company rose to prominence as one of the largest and most respected civil contractors in America. In addition to signature subway jobs in Los Angeles, San Francisco, Washington, D.C., and New York, J.F. Shea Construction has completed scores of tunnel, highway, and water treatment infrastructure projects throughout the country. The company continues to be a leader in the heavy construction and tunneling industries.

In the late 1980’s Mr. Shea discovered his true calling: support for inner-city Catholic Schools, and scholarships for disadvantaged students. Over the last 35 years, Mr. Shea and his wife Dorothy have provided tens of thousands of scholarships and funded more than 1,000 school renovations on more than five hundred different campuses in the Archdiocese of Los Angeles and across the United States. This dedication to Catholic education brought him decades of joy and fulfillment and made a lasting impact on countless communities throughout Los Angeles and the nation.

Mr. Shea’s life and his professional achievements were defined by his love of family and his strong Catholic faith. He attended daily Mass throughout his adult life and balanced the demands of running a multi-billion dollar company with family dinners and a competitive tennis hobby that saw him rise to the #1 ranking in California in his fifties.

Blessed with good health and a sharp, inquisitive, and decisive mind, Mr. Shea personally directed his philanthropic affairs and was an active participant in corporate management until the day he was called Home.

He is survived by his beloved wife of fifty-four years, Dorothy Babbitt Shea; his eight children, thirty-one grandchildren, and one great-grandson. He was pre-deceased by his first wife Susan Hitchcock, who died in 1967, his brother Gilbert Shea, his sister Susie Shea Hanrahan, and his granddaughter Maura Davison.

In lieu of flowers, donations in honor of John Shea may be made to the Catholic Education Foundation of Los Angeles (https://cefdn.org).