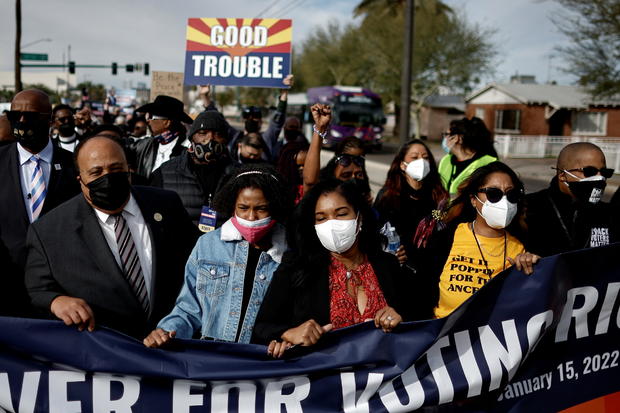 King Family Says Holiday is No Cause for Celebration

Washington — Long known as a holiday dedicated to service as “a day on, not a day off,” this Martin Luther King Jr. Day is taking on renewed significance as voting rights legislation faces seemingly insurmountable hurdles in Congress.

The couple and their 13-year-old daughter, Yolanda Renee King, were capping a weekend of mobilizations that included a march in Phoenix Saturday with a peace walk in Washington D.C. Monday. The King family is being joined by a coalition of more than 180 groups and congressional leaders including Speaker Nancy Pelosi and Congressional Black Caucus Chair Representative Joyce Beatty.

“We’ve seen what happens when the White House puts its full weight behind an issue,” Waters King said, referring to passage of the bipartisan infrastructure bill last year. “What we also are saying to the president and Congress is that you delivered for bridges, now deliver for voting — whatever it takes to get that done.”