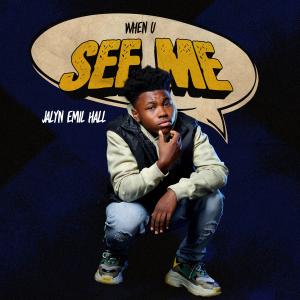 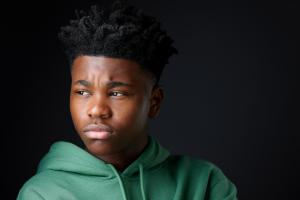 Jalyn Emil Hall drops his second track for this year, “When U See Me,” courtesy of BTMR Entertainment Group.

LOS ANGELES, CALIFORNIA, UNITED STATES, October 19, 2022 /EINPresswire.com/ — Blazing the mic with a rapid-fire, gritty flow and raw, in-your-face lyrics is California-based recording artist Jalyn Emil Hall. In his latest track, “When U See Me,” produced by Malcolm “Mal G” Harvest, he pulls no punches with his rhymes, unapologetically and authentically himself. Running three-minute long, Hall clearly brings his signature heat in “When U See Me.”

Armed with a hardcore repertoire of wordplay, Jalyn Emil Hall attacks with energetic assertiveness, not letting anyone stop him from flying high. In “When U See Me,” he flaunts his lyrical dexterity and continues to build on the surge of momentum created from his highly-rated track in April, “Been Thru It.” The intent in his voice is on full display, and his flow exudes positivity, encouraging everyone to keep on grinding no matter what. He says, “No goal was ever met without a little sweat.”

“When U See Me” is now out worldwide, including on Spotify. Make sure to follow Jalyn Emil Hall via Instagram to get real-time updates on his upcoming endeavors, including a new music video and a new single this month. For any booking-related inquiries, contact michelleharvest@btmrentertainment.com.

About Jalyn Emil Hall
Jalyn Emil Hall is a renowned actor who started appearing in TV shows and movies at the tender age of six years. He debuted in 2018’s “The House With A Clock In Its Walls” and has earned his stripes with roles in NCIS: Los Angeles (2018), Black-ish (2018), and Shaft (2019). He appeared in the 2021 sequel Space Jam: A New Legacy and currently portraying Dillon James in a starring role in the tv series, All American. He has upcoming live shows and projects under his belt, including the sports drama TV series, The Crossover (Disney+) and the movie Till with Whoopi Goldberg, playing in theaters now.

Hall started scaling up his talents in the music industry with the release of his 2020 debut track, ‘One of a Kind.’ 2022 has seen him release his sophomore track, ‘Been Thru It,’ followed by “When U See Me” in September. Indeed, Hall is not showing any sign of slowing down, bringing a refreshing style to today’s hip-hop game. This only proves further that this young talent will be one of the brightest lights in the entertainment industry.