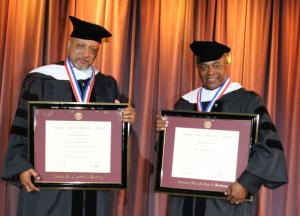 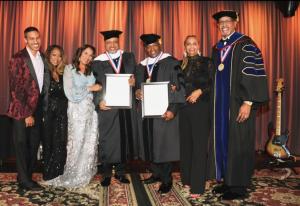 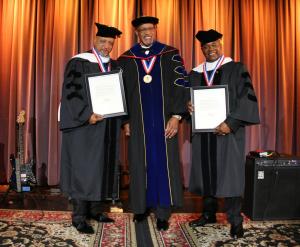 I’m thankful to receive this honorary doctorate. I wish my deceased mother, father, and sister could have been there to see it happen. I see it as a guiding light for what remains for me to do.”

LOS ANGELES, CALIFORNIA, UNITED STATES, November 9, 2022 /EINPresswire.com/ — Two incredible legends in the music industry celebrated their success in a big way on Saturday, November 5th at the Grammy Museum in the heart of downtown LA. Both Felton Pilate and Michael Cooper who are original members of the Funk group known as Confunkshun, were surrounded by friends, family, and fans from all over the world when they were pleasantly surprised with not one, but two types of awards that recognized them as pillars of inspiration to the entertainment industry and communities from far and wide.

“An Intimate Evening with Felton Pilate” was put together by Pilate’s wife Jennifer, in honor of his seventieth birthday. The star-studded red-carpet extravaganza was held in the Clive Davis Theater inside the Grammy Museum. The evening began with celebrities coming in to enjoy hors d’oeuvres and picture-perfect moments shared amongst the crowd as they graced the red carpet in their formal attire. Once in the theater, a tone of genuine admiration filled the room when Pilate was introduced by “We Luvv Rare Grooves” host, Clifton Moseley who then showcased a beautiful music video tribute to Pilate highlighting the numerous songs he has written for Confunkshun. This was followed by an on stage interview where the two men discussed Pilate’s incredible work. All of the guests were also entertained by Pilate who performed several songs, including two from the new Confunkshun Christmas album. The evening progressed with the Music & Medicine host, Moshe Lewis introducing stellar performances by the iconic Janice Marie Johnson of the group, “Taste of Honey’, the soulful Michael Cooper, and Felton and Jennifer Pilate who wowed the crowd with several classic duets.

To culminate the ceremony, Pilate’s publicist, Desirae L. Benson went on stage to inform all the guests that the night was not over and that there were a few special surprises in store for everyone to see. She then summoned Dr. Kenneth Curry to come join her on the stage where he explained to the curious crowd exactly why he was there. Once he explained that he would be presenting both Pilate and Cooper with Honorary Doctorates of Humane Letters from the Christian Bible Institute under the direction of Dr. Tony V. Lewis, the shock on the faces of Pilate and Cooper were priceless. The guests went wild and began cheering for the two men as they stepped on the stage to join their wives who were now standing there as well. They had no idea this was going to happen; all they knew was they were there to celebrate Pilate’s birthday. Pilate expressed his thoughts and said, “I felt confusion, shock, and disbelief when it became clear what was happening. I had to turn my back to the audience for a moment to try to control and hide the tears, it didn’t work, I was overwhelmed with emotion.” Cooper was equally surprised and explained, “I was completely caught off guard at the presentations and the preparation for the event that I thought was only a birthday celebration for Felton. It turned out to be far more than I could have imagined. To be presented with a Doctorate degree for my contributions to music was completely overwhelming to me.”

This special doctorate is awarded to those who have distinguished themselves through humanitarian and philanthropic contributions to society. Not only that, but both men have been noteworthy and significantly influential throughout their respective careers. Pilate shared his thoughts and said, “Sharing what I’ve learned on both sides of the recording console has always felt like what’s supposed to happen. I believe that it is our responsibility to give back as much as we can.” Pilate and Cooper have gone above and beyond for decades, so although they were surprised in the moment as were the entire theater of attendees, it was certainly an expected sentiment of honor and respect that was publicly given to two wonderful human beings. The gentlemen were also given Presidential Lifetime Achievement Awards for their lifetime of service through music and more. It is the most prestigious and has been awarded to few Americans to recognize over 4,000 hours of extraordinary service. Cooper says, “The title of Doctor will take some time to get used to. Receiving the Presidential Lifetime Achievement Award signed by Joseph R. Biden was unbelievable and overpowering.”

Formerly known as (Project Soul) Confunkshun is an American R&B and funk band whose popularity began in the mid-1970s and ran through the 1980s. Influences included Earth, Wind & Fire; Commodores; Chaka Khan; and Sly and the Family Stone. Signed to Mercury Records in 1976, ConFunkShun enjoyed a decade of successful national and overseas tours, eleven chart-topping albums, and numerous hit singles, including a Billboard magazine “Number One With A Bullet” hit single on the Top R&B Singles chart. Recently Bruno Mars and Anderson .Paak, the magical duo that is known as Silk Sonic, covered the ConFunkShun ballad, “Love’s Train.” The original song was released by the band 40 years ago and both Michael Cooper and Felton Pilate are credited with writing it. Silk Sonic’s cover of the song went to #1 on the Billboard chart for over 15 weeks. This sparked an even bigger fire for Confunkshun in the entertainment industry, inspired more touring for the group, and more fans from all walks of life and ages.

To learn more, go to: https://en.m.wikipedia.org/wiki/Felton_Pilate