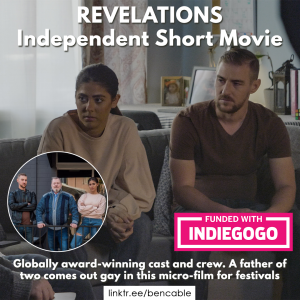 Cast on set of the short film Revelations

Globally award-winning cast and crew in Revelations. A father of two comes out in this drama micro-film for festivals

It was great to work again with Sierra Nowak and Christopher Michael Rose; both are very talented actors. The crew at Jig Reel Studios was awesome.”

LOS ANGELES, CA, UNITED STATES, November 22, 2022 /EINPresswire.com/ — Acor and Producer Ben Cable is proud to announce the launch of their first project on Indiegogo. Globally award-winning cast and crew. The film is based on a true story of a father of two who comes out gay in this micro-short movie for film festivals.

You can be part of this Independent Hollywood Film. The cast of Revelations includes Christopher Michael Rose and Sierra Nowak. The crew is from Jig Reel Studios. The writer of Revelations is Lydia Lane Nix.

‘Revelation’ is in production now and is scheduled to be released in December 2022. Contribution Perk Packages start at $40.00 on Indiegogo.