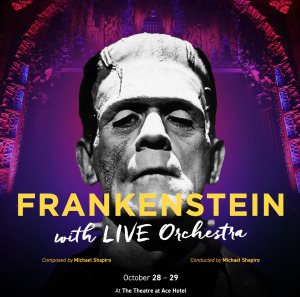 Composer Michael Shapiro’s new version of Frankenstein—NOW with Libretto—To Debut at The Theater at the Ace Hotel in downtown Los Angeles-www.LAOpera.org

The audience was riveted to their seats. His score is majestic and flowing when set against the flickering image on the screen, touching during tender moments, harrowing during disturbing ones.”

LOS ANGELES, CALIFORNIA, UNITED STATES, September 28, 2022 /EINPresswire.com/ — Just in time for Halloween, a special two day showing of the 1931 classic film, Frankenstein, will play at The Theater at the Ace Hotel Friday October 28-29th, 2022. Originally released without a musical score, composer Michael Shapiro was inspired to craft a soundtrack for the horror masterpiece. As the classic film plays on the big screen, he’ll conduct his critically-acclaimed and atmospheric score, performed live by the LA Opera Orchestra, including for the first time, a libretto from singers at the Los Angeles Opera’s Domingo-Colburn-Stein Young Artist Program. Complete with a mad scientist, bumbling henchman, mobs of torch-bearing villagers and Shapiro’s majestic movie score, this the ultimate audience experience for a truly iconic film

THE MONSTER IS COMING HOME!
Composer Michael Shapiro’s Frankenstein
Premieres Live with the L.A. OPERA
Shapiro’s new version of Frankenstein—NOW with Libretto—To Debut at The Theater at the Ace Hotel in downtown Los Angeles Friday, October 28 and Saturday, October 29, 2022.
For tickets and information, please call the LA Opera Box Office at (213) 972-8001, or visit www.LAOpera.org

A special two day showing of the 1931 James Whale directed classic film Frankenstein starring Boris Karloff and Colin Clive will play at The Theater at the Ace Hotel Friday October 28-29th, 2022. The horror masterpiece was originally released without a musical score, which inspired composer Michael Shapiro to fill in the void by creating an original new soundtrack. As the classic film plays on the big screen, he’ll conduct his critically-acclaimed and atmospheric score, performed live by the LA Opera Orchestra, and for the first time, Shapiro adds a libretto for singers from the Los Angeles Opera’s Domingo-Colburn-Stein Young Artist Program to further embellish the piece — making this the ultimate audience experience for a truly iconic film.

The film featured a career-making performance by Boris Karloff and is credited with saving Universal Pictures from bankruptcy during the early days of the Depression. Originally lacking a through-composed soundtrack, Shapiro created the first of his 3 orchestral versions in 2002. Inspired by the opening of the film in which a priest intones a prayer over a burial, he chose the text of the Latin Requiem Mass as the libretto for this piece. Frankenstein -The Movie Score has received over fifty performances worldwide and gone on to be the most performed work of its kind.

The work has never been performed in Los Angeles where Frankenstein was originally created for Universal Pictures. These special Halloween screenings and performances will be at the recently restored Theater at The Ace Hotel, formerly the United Artists Theater. Designed in the 1920s as a lavish showcase for the productions of Mary Pickford, Charlie Chaplin, Douglas Fairbanks, and D.W. Griffith, the theater is a perfect venue for the L.A. premiere of the great horror movie’s internationally recognized score by Michael Shapiro. Following Los Angeles, upcoming premieres of the score will include the Remix Ensemble in Portugal, conducted by Brad Lubman and the Northern Film Orchestra’s presentations in both Manchester and Liverpool.

About the Composer
Michael Shapiro guest conducts internationally and is Laureate Conductor of The Chappaqua Orchestra. He has written over 100 works for orchestral, theatrical, film, chamber, choral, and vocal forces. His music has been performed by many of the world’s great orchestras and performers in North America and Europe, and much of his music is recorded and available on major platforms such as Spotify and Apple Music. His music is regularly broadcast throughout the world, including SiriusXM, National Public Radio, BBC, CBC, ABC-Australia, Polskie Radio, and over 50 commercial radio stations in North America. His score for the classic film Frankenstein is his most popular work and has been performed over 50 times internationally. For more information, please visit www.MichaelShapiro.com

About the Work
After premiering in 2002 at the Film Society of Lincoln Center’s Jacob Burns Film Center in Westchester, New York, Michael Shapiro’s Frankenstein-The Movie Score has received over fifty (50) performances worldwide including opening the Bergen, Norway International Festival, Italian premiere by the Milan Symphony Orchestra, German premiere at the Opera Trier, Russian premiere at the Mariinsky Lendok Film Annex in St. Petersburg, USA premiere of the full orchestra version by the Virginia Symphony, Washington, D.C. premiere of the wind ensemble version by the United States Navy Band at the AFI Institute Theater, Canadian premiere by the Royal Canadian Air Force Band in Winnipeg, wind ensemble premiere by the Dallas Winds at the Meyerson Symphony Center, and the recording of the overture in the U.K. by the famed City of Birmingham Symphony Orchestra.