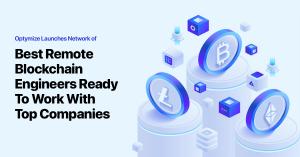 LOS ANGELES, CALIFORNIA, UNITED STATES, November 7, 2022 /EINPresswire.com/ — Optymize is a network of top-vetted remote engineers. This network focuses on equipping tech companies with talented remote developers. They offer developers for different roles like a full stack, backend, and frontend. Recently, they have offered engineers in emerging technologies such as blockchain, VR/AR and metaverse. Optymize developers are at the forefront of innovation and development. The developers have worked on innovative projects like NFT, the Internet of Things, Data Storage and many other blockchain applications. These technologies are disrupting world businesses in many sectors. Optymize is also looking forward to applying its distributed network of blockchain developers to address the current needs for the development of tech industries.

“Optymize impressed us with their ability to bring us quality blockchain developers at an optimal price,” says Alan Finkel of Union Editorial. Union Editorial hired six developers from Optymize to build a blockchain-based platform in 2021. The developers built a financial payment system called Collection Account Management(CAMA).