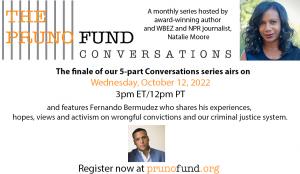 The Pruno Fund Conversations is an extraordinary series. I found the extraordinary in the exonerees activism. They are resolute in their desire to change the criminal justice system.”

LOS ANGELES, CA, UNITED STATES, October 3, 2022 /EINPresswire.com/ — (LOS ANGELES – October 3, 2022) – While over 3,000 individuals have been exonerated of wrongful convictions since 1989, statistics by the National Registry of Exonerations indicate that between 2%-10% of those in currently in prison are innocent. Headlines in the papers on exonerees don’t offer the opportunity to really see or understand the person behind that wrongful conviction—what they faced, how they kept their humanity, hope and faith intact while incarcerated–knowing that they were innocent. Nor do they speak to the exoneree’s activism. The Pruno Fund, an organization that helps those who have been wrongfully convicted transition from life in prison through emergency grants and speakers training and paid speaking engagements, has launched a monthly virtual series of conversations with 10 individuals who have lived through these experiences. The series is hosted by NPR/WBEZ’s Natalie Y. Moore beginning Wednesday, June 8, 2022 at 3pm ET/12pm PT and airing the second Wednesday of each month through October 12, 2022.

“We created The Pruno Fund Speakers Bureau to not only help our exonerees get paid for telling their stories, but also offer their services to organizations who want to engage and motivate their employees and members,” says Nikki D. Pope, Co-Founder. “Despite the harshness of prison and the unfairness of their incarceration, these are people who persevered against nearly insurmountable odds, who remain hopeful and upbeat about what lies ahead for them. Our speakers are ideal in delivering such messages.”

Concludes The Pruno Fund Co-Founder, Courtney B. Lance, “The Pruno Fund Conversations is an extraordinary series. I found the extraordinary in the exonerees activism. They are resolute in their desire to change the criminal justice system. They have passed bills, lobbied for legislation and speak, regularly, with lawmakers to help those innocent women and men, still in prison right the wrongs that they’ve suffered for crimes they did not commit. I also find the extraordinary in their support of each other. There is a definite brother/sister hood that exists among the exoneree population that is considerate and supportive of the needs of the newly exonerated as they re-enter and navigate the unfamiliar world, and of those who are still struggling to prove their innocence. This series will illuminate the public’s perception of wrongful conviction, and the characters’ of these men and women. This series will shed a light on the fact that what has happened to them can happen to anyone, at any time.”

Registration for the Conversations series is $15 per episode or $50 for the entire series. Please visit www.prunofund.org to register. Previously aired conversations are available for viewing.

About The Pruno Fund
The Pruno Fund was established to help exonerated men and women succeed in transitioning from prison to life on the outside. The Fund provides grants to. The Pruno Fund also offers a Certification Program, for which any Exoneree interested in public speaking will be able to register to receive training towards certification.

About The Pruno Project
The Pruno Project published its first book, Pruno, Ramen and a Side of Hope: Stories of Surviving Wrongful Conviction telling the stories of 10 exonerees from three perspectives: the actual case, the exoneree and a loved one. It produced an award-winning audiobook of the same name featuring Whoopi Goldberg and Bill Kurtis as narrators, along with talent such as Ashley Judd, Ricki Lake, Esai Morales, LisaGay Hamilton, Laraine Newman and Richard Steele. Later this year, The Pruno Project will release the 2nd edition of the inspired book, with new cover art by Fernando Bermudez.