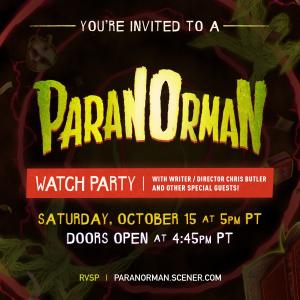 The nostalgic bond ParaNorman cultivates each Halloween is incredible. Scener provides the perfect place for all fans to experience the film together”

LOS ANGELES, CA, UNITED STATES, October 12, 2022 /EINPresswire.com/ — Scener, in collaboration with LAIKA, celebrates the 10th anniversary of ParaNorman with the official worldwide watch party on Saturday, October 15 at 5 PM PT (virtual doors open 4:45 PM PT). Writer and Director Chris Butler will join fans for a special screening, where he will share live commentary over video for the first 30-minutes of the film and answer questions fans drop in the live text chat. Following the screening, five emerging filmmakers — JP and Beyond, ACM Official, Blake Ridder, InCamera, and Film it Yourself — will showcase their unique spin on the timeless stop motion classic.

Starting today, fans can sign up for the ParaNorman Watch Party for free, which grants them access to Scener’s custom-built virtual theater designed to host thousands of guests. To join the watch party, simply download the Scener Google Chrome extension for laptop or desktop viewing. Those joining from the United States can watch from their mobile devices with Scener’s mobile app. To join LAIKA’s official ParaNorman Watch Party, hosted by Scener, RSVP for free at paranorman.scener.com.

ParaNorman Writer and Director, Chris Butler: “The nostalgic bond ParaNorman cultivates each Halloween is incredible. Scener provides the perfect place for all fans to experience the film together, whether you’re rediscovering and reigniting your love for the film or experiencing it for the very first time.”

Scener CEO, David Baron: “This is gonna be fun! ParaNorman is one of the most celebrated films of its genre, and has created a global community that spans generations and backgrounds. We can’t wait to host Writer and Director Chris Butler and fans, to celebrate the magic behind his filmmaking and the creators who have been inspired by it.”

Scener® is the social viewing platform where friends and fans come together over video chat while watching your favorite programs. Scener makes TV social and provides an interactive way to stay connected while enjoying the world’s best video entertainment. The platform enables groups of viewers large and small to synchronize playback of HBO Max® alongside video, audio, and text chat in a virtual screening room. Scener launched in 2018 and before that was incubated by RealNetworks Inc. Scener has offices in Los Angeles and Seattle. To learn more or join the platform, visit www.scener.com.

LAIKA, founded in 2005 in Oregon and shaped by the vision of its President & CEO Travis Knight, is a studio that combines a classic commitment to artistry and the cinematic crafts with a delight in innovation and cutting-edge techniques. The studio’s five films: Coraline (2009), ParaNorman (2012), The Boxtrolls (2014), Kubo and the Two Strings (2016) and Missing Link (2019) were all nominated for the Academy Award® for Outstanding Animated Feature. Kubo and the Two Strings won the BAFTA Award for Best Animated Film and received an additional Oscar® nomination for Visual Effects. Missing Link was awarded the Golden Globe® for Best Animated Film. LAIKA was also awarded a Scientific and Technology Oscar® plaque in 2016 for its innovation in 3D printing. LAIKA is currently in production on its sixth animated film Wildwood, based on the book series by Colin Meloy and illustrator Carson Ellis. The studio is developing its first live action feature film based on the action thriller novel Seventeen by screenwriter John Brownlow as well as the animated feature The Night Gardener, in partnership with and based on an original idea by Bill Dubuque, the creator of the hit Netflix series Ozark. To learn more about LAIKA, visit www.laika.com.