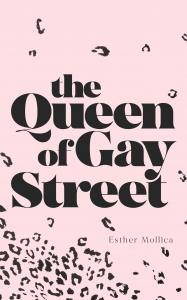 One of the most candid books I have ever read, Esther Mollica’s The Queen of Gay Street is a breath of fresh air when it comes to personal storytelling.”

SACRAMENTO, CA, UNITED STATES, November 14, 2022 /EINPresswire.com/ — In New York, the party never stops and love’s always just around the corner. At least, that’s what queer journalist Esther Mollica told herself when she quit her job during the 2008 recession and moved three thousand miles away to become New York City’s first blogger on lesbian dating. Her hometown brought her nothing but heartache, and none more devastating than learning that the love of her life was secretly married to a man. On the other hand, New York, with its brazen, sadistic wiles, promised something more than just another walk of shame.

“One of the most candid books I have ever read, Esther Mollica’s The Queen of Gay Street is a breath of fresh air when it comes to personal storytelling. I absolutely loved this book from cover to cover, and I found myself imagining each of Esther’s encounters along the way. The author’s strength bleeds through on every page of the book, even in times of hardship.” says Kristi Elizabeth, Manhattan Book Review. The full review can be read HERE.

“The Queen of Gay Street is an absolute delight for anyone who’s ever dreamed of running away to the big city to reinvent themselves. Esther Mollica’s writing style is tantalizingly descriptive, brilliantly bold, and unapologetically Lesbian.” – Beatrice Toothman for Seattle Book Review.

Publishers Weekly said “This is as much a briskly comic recounting of the lesbian dating scene of the late aughts as it is an affecting case study of finding love that’s not necessarily “requited” but at least “acknowledged.” With a feel for the telling detail and a deft hand at both punchlines and insights, Mollica offers a dishy, affecting memoir that should resonate with readers well beyond that “microscopic subset.”

Kirkus gave Mollica a starred review and said “Mollica’s reminiscences are both a celebration of the promise of New York to a young woman hungry for connection and a plangent account of the pitfalls of bad relationships and isolation….The result is an exhilarating ride on Gotham’s emotional roller coaster. An entertaining, often poignant portrait of New York romance blending humor with heartache.”

Esther Mollica has written for Wired, GO, Bust, Curve, Autostraddle, Nonchalant and The Bay Area Reporter. Her short romantic comedy, Never the Bride, was featured as one of four films by up-and-coming women of color in San Francisco’s Frameline Film Festival, 2010. In 2011 she was named, New York’s Most Eligible Lesbian Bachelorette by Time Out New York, which ironically almost scared off her wife.

Manhattan Book Review is a part of the City Book Review company and publishes more than 200 reviews a month in more than 40 genres. City Book Review has four review outlets, San Francisco, Manhattan, and Seattle Book Reviews, and Kids’ BookBuzz. They also license three other publications, San Diego, Portland, and Tulsa Book Reviews. Independent authors are encouraged to check out all of the publications for review and marketing help and guidelines. Authors interested in having their books reviewed can visit the book submission guidelines page for City Book Review. Find great book reviews on all of their websites.