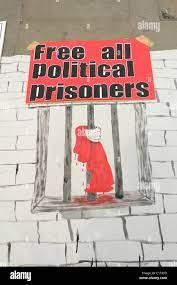 Black Muslim Tribal Judge, a political prisoner in jail for 8 weeks. No relief.

FREMONT, CALIFORNIA, UNITED STATES, November 15, 2022 /EINPresswire.com/ — Last Friday, the 9th U.S. Court of Appeals opened a ‘mandamus’ suit against the United States District Court in San Jose, CA, filed by Indian Tribal Court Judge, who has been in the custody of the United States Marshal Services at Santa Rita Jail since September.

The case of “In re: Cary Peterson vs. USDC-CASJ” (a court-issued short version of the actual case title on the court papers filed by Costanoan Tribal Court Justice Cary Lee Peterson) follows court action at Silicon Valley’s courthouse, as previously reported in the news this month (https://www.todayinlaw.com/article/599916414-abuse-of-power-federal-judge-orders-black-judge-to-jail-for-performing-his-tribal-court-duty) (https://emwnews.com/breaking-news-black-judge-jailed-by-white-judge-for-doing-his-job). These federal court hearings resulted in Peterson’s defense council, Jessie Ortiz, impeaching a government witness during testimony. Court records show this witness (Anthony Cardenas) worked as a federal probation officer who had been assigned to monitor Peterson.

Cardenas, a Justice Department official, told the Court he had been communicating with San Benito County law enforcement officials since July 2022, concerning Judge Peterson’s work for an Indian tribal community in Indian Canyon and a tribal court order of restraint issued by Judge Peterson against a non-Indian trespasser on the Indian reservation.

Further, Cardenas explained that this communication with county officials, among other questionable matters on Peterson’s employment for an Indian tribal government, work income, credit report scores, student loan history, place of residence, unpaid court fines, a court form submitted by Peterson that was allegedly incomplete or not legible, was why he filed a complaint in September to request that U.S. Attorney Stephanie Hinds and United States Magistrate Judge Nathaniel Cousins keep Peterson in jail without bail.

On Oct. 27, Tribal Justice Peterson attempted to use a federal court rule that allows an Indian tribal government official to intervene in a court case. But Judge Cousins said that the Costanoan Tribal Government’s [‘Rule 24(b)’] intervention would not be allowed and thereafter ordered Peterson to remain detained due to his belief that Peterson abused his judicial power to commit fraud involving the Tribal court’s order of restraint against a non-Indian, of which Peterson used to obtain a civil standby from San Benito County’s sheriff and district attorney, and enforce Tribal policing of Indian Canyon Road (an Indian reservation road).

Peterson’s ‘petition for an extraordinary writ’ stated that there are three (“overlapping”) court cases at San Jose’s federal courthouse involving him as a party (U.S. v. Peterson, US-CAND-22-CR-0338-BLF; Peterson v. Hinds, CAND U.S. Attorney, US-CAND-21-CV-7556) and an employee of a party (Sayers-Roods, Costanoan Indian of Indian Canyon v. Machado, US-CAND-22-CV-03092-EJD) who is the head official of an Indian tribal government, which qualifies for ‘extraordinary relief’ from the Ninth Circuit under the ‘Bauman Factors test,’ curing issues and controversy that cannot be resolved through the normal trial or appeal process.

Presently there are no scheduled hearings in the Ninth Circuit; and no legal action taken against Peterson by San Benito County, or the judiciary ethics board, which is the governmental body authorized to handle issues on judicial ethics and disability.

In the closing remarks of the October 28 hearing, Peterson asked Judge Cousins whether his reason for denying his release from jail upon his legal council impeaching the DOJ’s witness was because he was “too Muslim, too Black, or not good enough” to be a Judge for an Indian tribal court. Judge Cousins had no response to Peterson’s question stated on the court record.