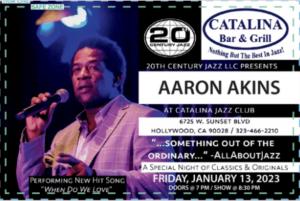 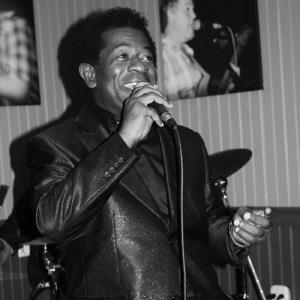 Ruth Webb called me Unforgettable because she fell in love with my live performance and stage presence.”

Singer, Songwriter and contemporary Jazz Artist Aaron Akins has agreed to allocate his original Catalina Jazz performance date to the City of Los Angeles and has made an executive decision to postpone his original date from December 8, 2022 to Friday, January 13, 2023.

Variety’s “Unforgettable” Aaron Akins will kick off the first quarter with a bang, set to perform and host the show of the century, located at the Catalina Jazz Club located in the heart of Hollywood. He will deliver some of his striking “Into the Cole” music honoring legendary musician Nat King Cole which was selected as Broadwayworld for Best Cabaret/Concert Artist in Los Angeles, Best Productions and Performances. He released his latest single “I Haven’t Tried You” on Sony Orchard Music, January 22, 2021, and last but not least he will be appearing on PBS, on Dr. Angela Williamson in a show called “Everybody”.

In his production field, Akins also performed as the iconic pianist and jazz composer “Herbie Hancock” in Netflix’s smash hit and Emmy Award Winning series “I Think You Should Leave” by Tim Robinson. Akins has accomplished many things throughout his career and will be Showcasing his unique talents on Friday, January 13th, 2023 at Catalina Jazz Club while performing classic hits and original timeless songs in that same style as well as his new contemporary single ” When do we love “. Akins mission and purpose is to provide the highest quality Jazz the world has ever seen via concerts, film and television. He can currently be seen on BET + hit series “American Gangster Trap Queens”. His relentless approach to music and entertainment is authentically him and a talent that he’s been blessed to share with the world for over a decade.

The Chicago Native will sing timeless originals at the premier Jazz club Catalina jazz which was established in 1976 for all Jazz Lovers. Many Talented Legends have graced the stage throughout the years including Figures such as Stevie Wonder, Dizzie Gillespie, Art Blakey, McCoy Tyner, Chick Corea, Ray Brown, Joe Williams, Max Roach, Carmen McRae, Betty Carter, Ron Carter, Joe Henderson, Benny Carter & Tony Williams and many more. Aaron Akins Music has always given an impactful energy to the souls around him, wings to the mind, flight to the imagination, and charm and gaiety to life.

He stated “Ruth Webb fell in love with my live performance and stage presence.”

Due to his eclectic live performances and witty personality he was coined as the “Unforgettable Aaron Akins” in Variety Magazine Exclusive with Ruth Webb alongside some of Hollywood’s most prestigious talent that was associated with Ruth including Judy Garland , Frank Sinatra, Sammy Davis Jr.Madonna, Diana Ross, Magic Johnson, Calvin Klein, David Letterman, Bill Clinton, Jerry Seinfeld and more. Aaron Akins has won many awards including the Jeanie Golden Halo Award of High Esteem From Southern California Motion Picture Council , BroadWayWorld for Best Cabaret Concert, Best Productions and Performances, last but not least an 2022 Acclaimed Artist Award from RCBCC Chamber. His performance was reviewed by BWW reporter Don Grigware and described as “striking and charismatic, Akins seems to have an unique ability to produce the same high-pitched vocal stylings of Nat King Cole and was accredited as a performer who really cares about his audience and makes his live performances fun and friendly with humorous anecdotes of his experiences.

Join Aaron Akins for live music, food and drinks at the historic Catalina Jazz Club as he performs the show of the century with original Jazz classics and new contemporary music. This will be a show you don’t want to miss on Friday, January 13th 2023.