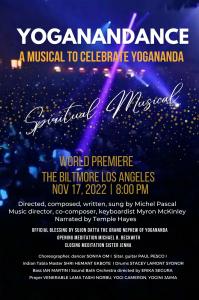 Yoganandance – A Musical To Celebrate Yogananda

This is going to be an experience unlike anything anybody has seen or felt before.”

“This is going to be an experience unlike anything anybody has seen or felt before,” says Pascal, who conceived and wrote the music to the show. “There are many books and documentaries about Yoganada, but our show is something quite special and unique. Yoganandance is a musical celebration of the spirit of Yogananda to engage people to get back to love.”

Tickets start at $80 and can be purchased here: https://concerts.cafe/product/spiritual-musical/

Yoganandance is a full-evening experience: There will be a pre-show Sound Bath Orchestra directed by Erika Segura beginning at 7:45pm. After an opening blessing by Sujon Datta (the grandnephew of Yoganada) and meditations led by Michael Beckwith, Yogi Cameron, Yogini Jaima and Venerable Lama Tashi Norbu from Tibet, the musical celebration begins. Temple Hayes will narrate while Pascal performs lead vocals. The all-star band features musical director Myron McKinley on keyboards, Paul Pesco (Madonna, Hall and Oates) on guitar and electric sitar, Shri Hemant Ekbote on tabla, and the rhythm section is comprised of drummer Stacey Lamont Sydnor and bassist Ian Martin. Sister Jenni will lead a closing meditation.

“It’s an incredible band of world-class players,” says Pascal. “They are truly exceptional on every level. And we have an amazing choreographer and dancer, Sonya Om, who is brilliant.”

Watch the video of Michel Pascal’s song “Yogandance” that inspired the musical: https://www.youtube.com/watch?v=gWCsNd7mvfk

To his millions of followers across the globe, Paramahansa Yogananda is considered one of the most important spiritual teachers and gurus of all time. He was the first major Indian teacher to settle in the United States. “His influence cannot be overstated,” says Pascal. “Yogananda brought meditation and Kriya Yoga to this country. The Los Angeles Times referred to him as ‘the first superstar guru.’ He’s the pioneer of wellness. All the teachings about meditation and yoga in America came from him.”

Pascal points out that, next to the Bible, Yogananda’s Autobiography of a Yogi is the most shared book in the world. “Before he passed away, Steve Jobs requested that everybody at his funeral received the book,” says Pascal. “Many celebrities over the years – everyone from Elvis Presley to Oprah Winfrey – have had their lives enriched by the teachings of Yogananda.”

Pascal emphasizes that Yogananda’s message is more important than ever today. “Calm the mind,” he says. “If you are stressed, you appreciate nothing. Your relationships don’t work. You’re tired and sick all the time. You aren’t present in your life. Yoganada’s teachings resonant during these times, especially after Covid.”

The setting of the Biltmore Hotel for the premiere of Yogandandance carries a special significance, as it is the site where Yogananda gave his final speech and passed away an hour later in 1952. “Because this is where Yogananda spent his last moments before he transitioned, our choice of the Biltmore Hotel is most important and special,” says Pascal. “I think audience members will truly feel his presence.”

Over the years, Pascal has seen his shows performed throughout the world. His musical Saint Therese, about Thérèse of Lisieux (also known as Saint Therese of the Child Jesus and the Holy Face) has been performed over 1,000 times internationally. Along with world-renowned musical director and keyboard player for Earth, Wind & Fire Myron McKinley, he’s performed concerts at New York’s famous Carnegie Hall five times since 2016.

“When I did Saint Therese, I discovered that a spiritual musical can fill you with positive, calming energy,” says Pascal. “It can reconnect you to your source. And the concerts that I’ve played are joyous and crazy. People jump up, they sing and dance. It’s incredible.”

The idea for Yoganandance came to Pascal in a vision. “It was instantaneous,” he says. “I began to write a song about meditation and calming the mind that everybody could sing and dance to. I started to scat, and then a melody came to me in one minute. It was magical.” Then he opened a book on Yogananda and saw the lines: “We must meditate, affirm and believe, and we realize that we are sons of God.” I was like, Wow! The words fit perfectly with the melody.”

Pascal promises a show that will rouse spirits. “People will feel their tensions release, and it will reboost their energy,” he says. “It’s a spiritual experience to calm the mind and give you an amazing positive energy. It’s going to be a moment that you keep in your mind forever. You’ll realize that life is beyond emotion. It’s a divine joy.”