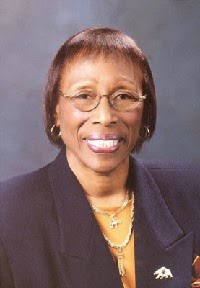 Topsy-Elvord, who had a long career in public service, was elected in 1992 to represent the city’s 6th Council district in Central Long Beach. After being selected unanimously by her colleagues twice to serve as vice mayor, she was termed out in 2000.

“At every post she had she went above and beyond to help people,” Kemp said. “She gave everything.”

“Mother Doris was a very special figure in Long Beach,” said 9th District Councilman Rex Richardson. “We called her ‘Mother’ as a term of endearment because she took all of us under her wing.

Richardson met Topsy-Elvord when he was a staff member for then-9th District Councilman Steve Neal and was an aspiring politician. “I would sit on her couch and listen to her stories as the only person of color on the council. Mother Doris always knew what was going on in the city well after her years of service. She continued to be a tremendous figure in our city.”